In organizations the extremist and the unwilling masses need each other

I feel a certain admiration for people who directly see what is wrong when they enter an organization, while I still need more time to think and further enquire before I can draw a conclusion. At the same time I feel estranged by this type of person, who often dismisses all undesirable remarks by labeling it as “natural born resistance to change”

I know from experience that even resistance to desirable and necessary changes can be considerable, regardless that the changes are in fact beneficiary to most of the ‘resistors’. Why is this resistance to change so strong and does it maybe include a certain quality?

I feel for both views at the same time a certain affinity and revulsion, how can this be?

As often happens with opposite stands or in case of a deep difference of opinion, the truth carries two faces. As we will see both characteristics are very important in organizations for both stability and change. The quintessence here is to see, identify and manage it.

Continuous improvement versus radical change
For years, both schools have fought for the attention of the Organizations world. There are moments where the school of radical changes dominate the news and everyone talks about ‘Business Process Redesign’, but it is followed by moments where the side of continuous improvement takes over with changing terminology from Total Quality, Total Productive Manufacturing to more recently ‘Lean’.

I am asked regularly to what school I belong, which strikes me as odd.

However, both approaches require different personalities and attitudes.

Continuously improving processes calls for continuous repetition with hardly any variation. To train to become the fastest five hundred meter ice skater, the athlete must skate the same round over and over (anticlockwise). Skating this round every once in a while clockwise is counterproductive to the process and to the ultimate goal. In this case the resistance to change is very functional.

Without change we seldom survive
Developments and changes in the field of technology, politics, demography, tastes, economy and so on, can suddenly change the environment of an Organization completely. The introduction of the phone, the fax and the internet, the aging population, stricter environmental and safety legislations, elimination of borders, is a small list of changes organizations are confronted with and what will not just pass over. These significant changes in the environment once in a while require a radical change for the organization and its processes.

This type of change is seldom being initiated by or within the group of people that have their focus on continuous improvement. Indeed we may even expect a large dose of resistance there.

We don’t like to change
Change is difficult for every individual or group and requires a strong ‘motivator’ who can ignite this process. Here, in the theory of change, reference is made to the need of a ‘burning platform’.

Being at a ‘burning platform’ the preparedness to take risks increases enormously. It reduces the commitment to the present situation (staying on a platform that is on fire) and increases the value of a possible alternative (jump and swim to salvation). This platform can be presented to the organization from the outside world, for example by the investor that threatens to break up the company and sell it in pieces if reforms are not realized. Or, as we will see later, by an especially appointed manager or external consultant.

To realize major changes to a large group, it is important that there is sufficient energy, enthusiasm and even a form of fanaticism to get the inert masses moving. 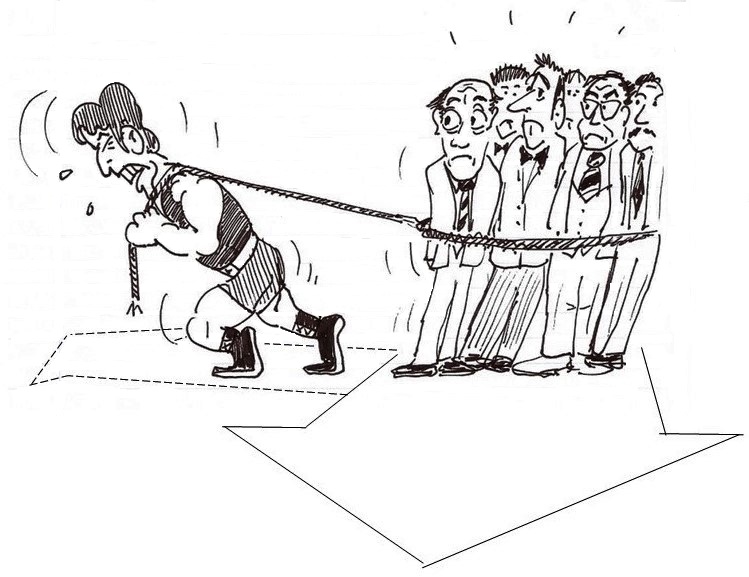 In order to get sufficient focus on less popular subjects, to maneuver to an, at first, less desirable direction, any agent of change should have a form of tunnel vision to enforce the change. He cannot afford to spend much time on all ‘cons’ and must focus energy and other means on the targeted change. Herein shelters both strength and future danger.

The big group should be able to sufficiently counterbalance this tunnel-viewer to prevent everything being sacrificed for this goal, whilst the agent of change must generate sufficient momentum to get the group moving.

Recognize, acknowledge and consciously manage
To realize a radical change a ‘fresh wind’ is needed to blow through the organization to get the inert masses moving. To achieve this you need human power that does not get distracted by all “yes, but’s” and rigidly keeps on wall papering against the wind.

When the group finally gets into motion and the organization achieves the set out goal, it is of the utmost importance to regain stability again. The group is now drifting, the change agent has full wind in the sails and is successful. However, reaching the target will not make the change agent more receptive and more open to criticism overnight. His hunger will not be satisfied, he has an excellent press and wants to continue along the road.

How often can we read in the press that a once successful change agent at some point in time has led their organization towards the edge of the abyss or worse?

Without an extreme change agent, too little focus and momentum is gained to turn the ship. However, once the ships starts turning the change agent needs to leave the bridge fast in order to allow the crew of ‘continuous improvers’ to pursue the newly set out course.

The extremist and the unwilling masses need each other
In organizations the extremist and the unwilling masses need each other and it is the obligation of the administrators (Directors, Boards of Directors and Supervisory Boards), to recognize both qualities and ensure the right mix at the right time. It calls for vision and insight to recognize in time that a radical change is needed and therefore an extremist should be put in place to move the continuous improvers from their present path towards a newly desired path. At the same time these administrators need to determine when, and safeguard that, an extremist is neutralized in time to allow sufficient room for the continuous improvers to once again continuously straighten out and improve the newly set-out path. It is often for this reason that Management Consultants or Special Managers from outside the organization (part) are hired to realize this ‘turn-around’. In this case, it is known from the outset of the project what the mandate of the change agent is and when his influence will diminish and end.

We must never forget that resistance to change also implies resistance to hypes. A leader who is capable to lead the flock against the flow towards the right direction is often also capable of leading the group over the edge.